I fell sick this week and was having trouble focusing on my writing. Coming up with a quality blog post felt out of my reach. Serendipitously I received a guest blog post from Graham at Float Tanks Solutions in my inbox. Please take the time to read this very thorough post on soundproofing your float rooms.

A woman got out of her float at Float On and told us that there was a loud clacking, like someone tapping on something occasionally. This was shortly after we opened. Now, we don’t wear ‘clacky’ shoes, Ashkahn wasn’t tapping percussively on anything in our shop (this time), and (as far as we knew) there wasn’t anything in the tank itself that should be tapping. We were stumped for weeks. It wasn’t until another customer described it as ‘sounding like high heels’ that we traced it to the hair salon next door, and the stylists walking on the tile they had put down. 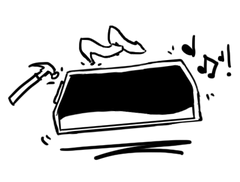 We figured out a way to fix it, which we’ll talk about below.

Then there was the rhythmic thudding, which we again found to be our neighbor, the shoe repairman (considering why we opened a sensory deprivation center next to a shoe repair shop should give you a good idea of our inexperience and unbridled optimism at this point). We thought it was one of his huge machines, but it ended up being one of his tiniest: it wasn’t even loud in the shop, only in the tanks.

We fixed this as well.

Then there are the one offs, like the woman who got out because she thought she heard music when in fact it was just a sudden and very intense burst of hail against the ceiling vent. Or the time someone heard thudding which ended up being someone on our roof trying to burglarize our cannabis club neighbors (unsuccessfully). And at least three floaters a week describe sounds that only existed in their heads.

For everything we have fixed, there are twice as many mysteries that will probably never be solved. END_OF_DOCUMENT_TOKEN_TO_BE_REPLACED