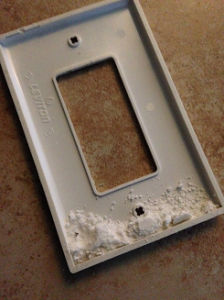 sure the power is shut off, test that it is shut off and have a knowledgeable partner on hand or simply hire an expert.

The other day I was closing down the Shoppe and tried to switch on the main light in one of our float rooms. The switch had a squishy feeling behind it and wouldn’t push all the way back into place. I shut off power to the room and removed the outlet. I was surprised to see a tremendous salt buildup behind the switch. There was so much salt that the button was being pushed out of place. I was also very taken aback by just how much built-up there was inside the electrical box.

This light and fan switch is located right by our shower and is certainly used a lot. I’m sure one located outside the path from tank to shower would have a much slower buildup. With that being said, I’m constantly surprised where I end up finding salt, so don’t assume those switches aren’t also being used by salty hands!

Because of this find, I have scheduled myself to investigate our switches that are located between a float tank and the shower every 6 months. I will also be checking all other switches in the rooms annually. I highly recommend implementing some kind of similar process in your float facility. We were lucky the salt buildup only caused a button to be pushed out. The risk of fire is a very serious one and should be taken seriously. Like so many other things in the float world, this is a very unique issue that only we will face. Be Safe!