When our pump started making occasional whirring noises I knew I was getting a hint that my pump was on it’s way out. When it started screaming like a banshee, I knew I had waited too long before figuring out how to swap it out. This is a brief account of my experience replacing our Floatarium filtration system.

The filtration system that came with our Floatarium has always been a pain. It is very difficult to change the filters (and salt water gets everywhere), the 1hp pump never seemed like quite enough power for the large amount of water it has to move, and the UV lights came with a mess of wires.
We have decided that UV light is not required in our tanks. It sounds great when you explain to customers that you have it, but I don’t believe that it is actually doing the work promised. We also decided an easier to change filter would be necessary along with a more powerful pump.

I went online and did my best comparative shopping hoping for a 2hp pump, however high prices led me to a less expensive 1.5hp pump on Amazon. I also found a reasonably priced filter online, and I paid extra so that the parts would arrive on Tuesday (the one day a week we are closed).

I had two days to kick back and wait for the parts to arrive. Everything was going to go ass scheduled, except that our pump died Monday morning. Every time we turned on the switch for the pump it would trip the circuit breaker. We canceled floats in the Floatarium for that day, but that didn’t mean we were safe. We use an inline heater (which I’m a big fan of) for heating our tank, which means that if the pump isn’t run, the water temperature drops continuously. Now I wasn’t just in a rush to get customers back into the tank, I was in a rush to save our salt water! 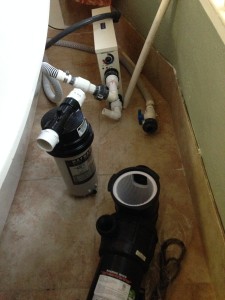 all fiasco involving me driving down a UPS driver on Tuesday, I got to work at the Shoppe and started disassembling our existing equipment. It was an adrenaline fueled experience knowing that this was all or nothing. I would either create a new filtration system before the water cooled or our water would crystallize.

Unfortunately I had to deal with the previous plumbing I had done that worked around my old filtration equipment. That, coupled with the fact that I didn’t have access to flex tubing meant I wasn’t going to build what I wanted. The great news is that I have a plumbing store one block away from me, so I was able to get all the other parts I needed from there. 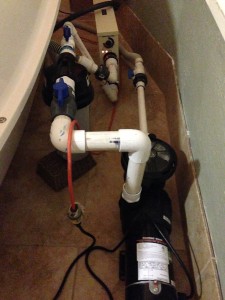 as few 90 degree bends as possible (it’s not good for water flow), and to try to keep the plumbing the same width tubing throughout. I failed on both of these accounts. There are more 90 angles than I originally planned, and there is a point where my 1″ tubing changed to 1 1/2″, then later back to 1″. It’s not the worst thing in the world, it just adds a little more stress to a system that is already stressed by pumping  incredibly dense salt water. I also wish the entire operation were closer to the float tank itself so that the water spent less time in the hosing.

I still have more work to do such as mounting the pump to a board and getting a more permanent stand for the filter to sit on (that can be removed so that the filter housing can drop down). Finally, I will need to hook up the float tank’s main control box to the pump so that it is switch operated (and tells us the temp of the tank.)

The great news is that we are able to float people in our Floatarium float tank again without canceling on any more customers.