As I drove Sandra home the night of my second float I turned to her and said, “Why don’t we do this? Why don’t we open a float center?”. She looked at me and nodded. “Absolutely”. Our minds were working in such unison that to this day I don’t think we even needed to exchange words, we still would have known what was next. I had assumed that our parents would warn us about going into business together, but the warnings never came. Instead, we were filled with encouragement and excitement from both sides of our family.

As the idea of opening our own float center began to take root, Sandra let me quit work and focus full-time on opening our float business.

What was next? Research. A LOT of research. Costs of parts, potential rent costs, electricity estimates, staff wages, maintenance. How much does salt cost!? For months our thoughts were on floating; nothing else entered our minds.
Approximately three months after my second float we had a business plan that was dialed in to the pennies.

Then came the down time. Finding investors willing to put money into the business meant asking for money on the investor’s time. There was probably one or two months of waiting where very little happened beyond looking at potential locations. Once we had our finances locked in, we made a hard push for finding a location. We knew that we did not want to be in competition with other float businesses in town, so we looked to set up shop on the west side of the river (all other float centers in Portland are located on the east side.)

One of the final locations we were interested in renting was a shoe-box building just around the corner to where we are now. This was the first time we were truly interested in a location. It had enough space for 4 float tanks and nothing else; it was perfect! It was at this point we learned that simply having the funding to start your business is not enough to actually acquire a location. The owners of the building were very wary of us cutting up the floors to install plumbing. They were mostly okay with taking down and putting up walls, but for what?

Float Tanks!
You want to put giant tanks of salt water in our building?
Yes! And a shower for each tank!
And people want to pay to experience… Nothing for an hour?
Actually ninety minutes!

So those talks didn’t last very long. It was very disappointing to say the least, but the concept of our idea not becoming a success refused to dislodge itself from our minds. There was no stopping us. 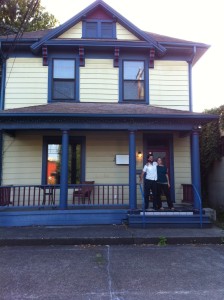 I think back on our first meeting with our now landlord and I honestly can’t believe that he rented to us. He was offering a beautiful 1904 home with 5 parking spaces (one of the only parking spaces on NW 23rd Ave. here in Portland), located in a trendy high-end location. He was literally fielding offers from millionaires who were willing to pay rent above what he was asking for. So how the heck did he end up renting to us? After describing our entire business plan (and emailing it to him) and after several hour-long sit down conversations, he told us that while he could make more money off of other potential renters, he decided that he wanted to leave a legacy; something that benefited the city of Portland and created true wellness. He believed we were two people who shared in that vision; that we were going to create something that would have a strong and lasting impact on Portland.

Over four months we built out our location and made it suitable to house three float tanks. During construction, float tanks littered our building; a lid here, a pump there. It was quite surreal. This was the most difficult portion of the experience for me. I couldn’t stop working and worked all day, every day.

I became exhausted and then depressed. It was a very difficult time for Sandra and I. While I was emotionally crashing, our funds were also bottoming out. We had a plan for three float tanks; acupuncture; massage; and a ‘Zen Room’ to be complete and operational by time we opened, and we were nowhere close to reaching that goal.

With our limited amount of time and dwindling funds, we decided to put all of our efforts into the two float rooms that were closest to being completed. When we opened, we would only have a few thousand dollars left in our account, and the survival of our business, our dream, depended on making a lot of money within the first month of opening (something that was not in our business plan). Construction took far longer than we expected; it was more expensive than originally planned and we were a far cry from meeting the original vision of what we wanted the shoppe to look like when it opened. With the opening quickly approaching, and no time to build our clientele, everything depended on the success or failure of our first month.

I had never before experienced such massive amounts of stress, and I still didn’t have an operational tank to unwind in. 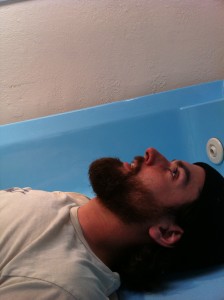